Arriving just a few minutes before schedule, Apple’s latest mobile OS, iOS 6, is ready for download. You can find the update in the “Software Update” section of your iOS device or you can get the update via iTunes. The software is compatible with the following models: iPhone 3GS and later; fourth-generation iPod Touch and later; iPad 2 and the new, third-generation iPad. 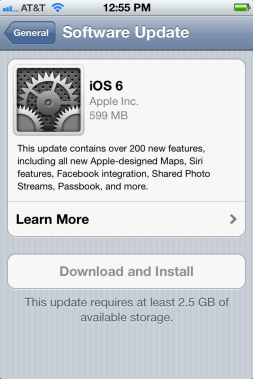 So far, most are praising the iPhone 5 and the software.There is, however, one real complaint from initial reviewers: the Maps app. Once you download the software you can see for yourself whether moving away from Google Maps on the iPhone was a smart idea.

We’ve tested out many of the most interesting new features already. Here’s some of our previous analysis and reviews of iOS 6 features:

by Tony Burkhart at 1:34 PM No comments: