Sage advice for a Monday morning, from @dalailama

Recognizing our human nature as beings whose happiness is dependent on others, we learn to open our hearts, and in so doing we gain a sense of purpose and a sense of connection with those around us.

by Tony Burkhart at 7:09 AM No comments:

Time to Review F.A.A. Policy on Gadgets - by @nickbilton on NYTimes.com

I agree with Nick Bilton on this one... let me be a tester too (and I'll gladly bring my own peanuts)... more over, I will gladly lend my devices and expertise to the industry to move this along.
That being said, (to me at least) there is no misnomer that the real reason devices should be stowed till flight, is so the flight attendants have your undivided attention, during safety instructions, before takeoff. That is a bit more important to me than the next paragraph in the Hunger Games. Really, I do hope they let us use electronics (cellular phones included), AFTER and only after instructions by the attendants for all safety procedures. Safety over convenience is a motto that should be adopted for mass transit all the time.
http://bits.blogs.nytimes.com/2012/03/18/disruptions-time-to-review-f-a-a-policy-on-gadgets/ 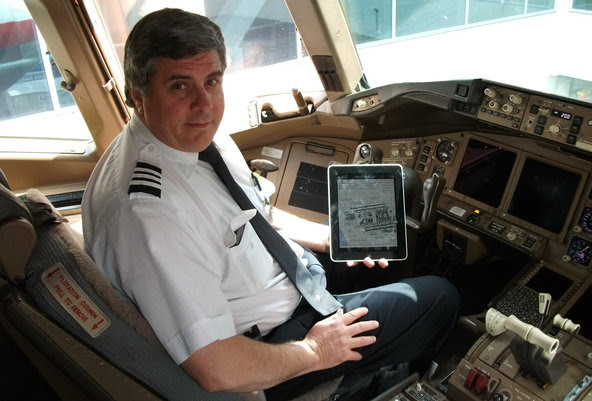 American AirlinesIPads may have made their way into cockpits, but passengers have been barred from using them while the plane is taxiing, taking off or landing — a rule that federal regulators are taking a new look at.

SAN FRANCISCO — On Monday morning I’m going to drive to the airport, check in for my flight to New York, then head to the airport bookstore for a stack of magazines to read on the plane. I’ll do this reluctantly because I will carry both an Amazon Kindle and an Apple iPad packed full of reading material in my bag.

I need the paper products because Federal Aviation Administration rules state that I cannot use these digital reading devices on an airplane during taxi, take-off or landing.

When I called the F.A.A. last week to pester them about this regulation — citing experts and research that says these devices could not harm a plane — the F.A.A. responded differently than it usually does. Laura J. Brown, deputy assistant administrator for public affairs for the F.A.A., said that the agency has decided to take a “fresh look” at the use of personal electronics on planes.

That’s going to be welcome news to the people in the United States who, according to Forrester Research, by the end of 2012 will have bought more than 40 million e-readers and 60 million iPads and other tablets.

Yes, you read that correctly. The F.A.A., which in the past has essentially said, “No, because I said so,” is going to explore testing e-readers, tablets and certain other gadgets on planes. The last time this testing was done was 2006, long before iPads and most e-readers existed. (The bad, or good, news: The F.A.A. doesn’t yet want to include the 150 million smartphones in this revision.)

Ms. Brown said that the administration’s current rules allow airlines to request use of electronic devices “once the airline demonstrated the devices would not interfere with aircraft avionics.”

Airlines have not done this because it is a expensive and laborious affair.

So, likely bowing to public pressure, the F.A.A. has decided to take this initiative into its own hands and is going to figure out a way to start testing new electronics on airplanes.

As Ms. Brown said: “With the advent of new and evolving electronic technology, and because the airlines have not conducted the testing necessary to approve the use of new devices, the FAA is taking a fresh look at the use of personal electronic devices, other than cellphones, on aircraft.”

Don’t run past the bookstore at the airport and start using your Kindle during takeoff just yet. There’s plenty of work to be done before these rules are changed. You see, while the F.A.A. is no longer ignoring the devices, it could very well entwine them in the kind of bureaucratic red tape only Washington can invent.

Abby Lunardini, vice president of corporate communications at Virgin America, explained that the current guidelines require that an airline must test each version of a single device before it can be approved by the F.A.A. For example, if the airline wanted to get approval for the iPad, it would have to test the first iPad, iPad 2 and the new iPad, each on a separate flight, with no passengers on the plane.

Ms. Lunardini added that Virgin America would like to perform these tests, but the current guidelines make it “prohibitively expensive, especially for an airline with a relatively small fleet that is always in the air on commercial flights like ours.”

The F.A.A. said it is exploring how to bring together electronics “manufacturers, consumer electronic associations, aircraft and avionics manufacturers, airlines, pilots, flight attendants and passengers” to figure out how to allow greater use of these electronics on planes. That’s a lot of people, organizations and bureaucracy to juggle. Plus the money to do this testing is going to have to come from somewhere.

The F.A.A. will now have an opportunity to update its current peculiar list of electric devices that approved on planes during take-off and landing, which includes electric razors and audio recorders, but not calculators.

By doing these new tests, we could finally squash the unrealistic fears that some people harbor that an e-reader could play havoc with a plane’s avionics, which could distract the flight crew or do worse. Most of these fears seem to be causing more trouble than the electronics themselves.

The National Aeronautics and Space Administration collects reports from pilots of incidents related to electronic devices. Of 50 incidents in the most recent report check from last year, few had anything to do with cockpit interference. Mostly it was reports of people who simply didn’t turn off their device or laptop batteries overheating, not of any kind of interference from those devices.

Those incidents that were related to the plane’s avionics were purely speculation. For example, in one report, a fuel gauge on a Boeing 757 was not working properly during takeoff, but began working again when the plane was landing. The report says the pilot “suspects” a possible electronic device on the plane caused the interference. The pilot admitted he did not do any testing.

It is in everyone’s interest that we move from unscientific fears to real scientific testing.

To keep things moving, the airlines could team up and each make a single plane available for say, one day a month, until the testing is done. And the device and software makers, many with very deep pockets, could foot the bill. Any device maker who doesn’t contribute financially to the testing won’t be added to the new updated list of approved electronics devices on planes.

I would like to volunteer to help as the guinea pig for these test flights. I’ll run up and down the aisle turning on e-readers, iPads and any other devices, and then settle down for a little undisturbed reading.

I’ll even bring my own peanuts.

by Tony Burkhart at 7:00 AM No comments: