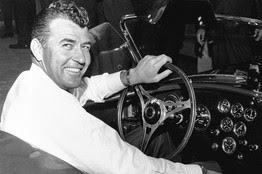 Carroll Shelby, who set land-speed records, behind the wheel in 1964.

His original Cobra was a two-seat racer with a Ford engine and a British AC Ace body. Introduced at the New York Auto Showin 1962, it created a sensation as one of the fastest production cars of its day.

Mr. Shelby struck up a long-term relationship with Lee Iacocca, the Ford executive behind the Mustang, to produce sports cars. In 1966 and 1967, Shelby American-modified Ford GT40s won the 24 Hours of Le Mans, among sport racing's most prestigious titles.

But it was auto racing and the sports-car business that made Carroll Shelby a legend.

Mr. Shelby grew up in Leesburg, Texas, where his father was a mail carrier. Confined to bed for parts of his childhood by a heart problem, he nevertheless managed to get a speeding ticket the first time he borrowed the family car.

After World War II, he raised chickens in Texas and was part-owner of a sports-car dealership. He raced in his spare time, and wore a trademark pair of bib overalls when he was behind the wheel.

After his chickens died in an epidemic, Mr. Shelby turned to racing full-time and soon became a dominant figure in the sport, winning three U.S. sports car championships. He also drove on the Aston Martin team in Europe, where he won in 1959 at Le Mans with team mate Roy Salvadori.

But heart problems put an end to his racing career, and he turned instead to his long-time dream: an American-designed sports car. The category was dominated at the time by the Chevrolet Corvette.Mr. Shelby moved to Venice, Calif., where he began turning out his first Cobras. By 1963, Cobras were routinely beating Corvettes in races. But it was the high-powered modified Mustangs that most fixed Mr. Shelby in the public's imagination.

Production was scaled back in the late 1960s, but Mr. Shelby reunited with Mr. Iacocca, now CEO at Chrysler, to help create the Dodge Viper.

The original Cobras are among the most collectible cars. In 2007, a 1966 model fetched $5.5 million at auction.

A version of this article appeared May 12, 2012, on page A4 in some U.S. editions of The Wall Street Journal, with the headline: Legendary Car Racer Who Designed the Cobra.