Praise everything related to new technology!!! What other mobile technology does business use that was brand new in 2001... anyone? Is anyone out there? Hold on, let me "Nextel" you, or get ya on the "two way"... better yet, let's communicate via morse code. Anyone still running Windows Server 2000 for "mobile mail"? How about Blackberry's... anyone still use those?
Sprint replacing Nextel network relic with LTE in 2014
GigaOM — Tech News, Analysis and Trends

For the last year Sprint has been talking up how it would replace its old Nextel iDEN systems with a shiny new LTE network, but until today it hadn’t revealed when. On Thursday, Sprint network operations president Steve Elfman provided that critical detail– 2014 — FierceWireless reported.

Speaking at an event at Sprint’s corporate HQ in Overland Park, Kan., Elfman said that the 800 MHz spectrum the iDEN network uses has already been named an official LTE band by the 4G standards powers, and Sprint fully expects to get Federal Communications Commission approval shortly to use the frequencies for 4G, according to Fierce. The only thing left for it to do is to shut down the old Nextel network.

iDEN is ideal for the walkie-talkie-style push-to-talk services that made Nextel so popular circa mid-2000, but it’s awful for delivering data services, which is the direction the wireless industry is charging toward with wild abandon. So Sprint’s answer is to move its push-to-talk over to its  CDMA data networks, shut down iDEN and harvest its frequencies for more LTE networks. 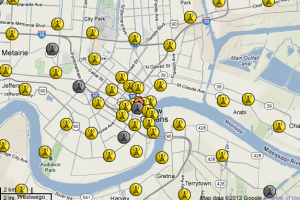 The process has already begun. Sprint has started scrapping iDEN base stations and towers in many markets, basically weeding out extra capacity as it continues to shed Nextel customers. It’s even begun posting site-by-site maps of the sunsetting process.

The major take-down work won’t begin until 2013, at which point Sprint will begin a wholesale conversion of its iDEN push-to-talk customers to CDMA and LTE, and start shutting down the Nextel service in whole cities. And as it revealed Thursday, in 2014 it will begin filling up those dormant 800 MHz airwaves with LTE.

Sprint won’t get an enormous amount of capacity out of the Nextel band. It owns an average of 18 MHz nationwide, plus the odd configuration of the band may mean it won’t be use all of its frequencies for LTE. But any bit will help. The LTE network Sprint is deploying this summer over its PCS frequencies measure only 10 MHz in width, compared to the 20 MHz used by Verizon and most of AT&Ts’ 4G systems.

Plus, Ma Bell and Big Red have a lot of unencumbered spectrum to expand their 4G networks into, while Sprint will be forced to cannibalize its CDMA systems to get more LTE capacity. But Sprint is counting on getting a big boost in 2013 when its current mobile broadband provider, Clearwire, hopes to turn on its own LTE network, supplying Sprint with reams of cheap bandwidth. The only drawback with that plan is that Clearwire, so far, only plans to launch LTE in its current limited WiMAX footprint.

Sprint has revealed only a few of its LTE launch markets, but blog Sprint 4G Rollout Updates has gained access to plenty of proprietary information about the full extent of Sprint’s Network Vision plans and has even identified the first 47 cities scheduled to receive the 4G upgrade this year.