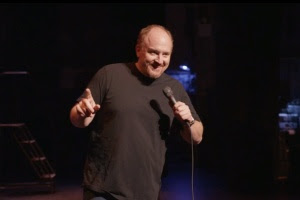 With the release of his latest standup special, Live at the Beacon Theater, comedian Louis C.K. went straight to his core audience with a cheap, easy-to-stream and easy-to-download distribution strategy. He asked interested viewers to pay just $5 via PayPal, and in exchange, they were given access to two streams of the show and two downloads of the show.

(For anyone who’s a fan of Louis C.K.’s TV show or his comedy in general, I highly recommend buying Live at the Beacon Theater now. It’s a full hour of Louie goodness and well worth the $5.)

Importantly, the file comes DRM-free, meaning fans could download the show and share it between computers or transfer it to other devices without using proprietary software or entering any sort of password or authentication to prove they were the ones that paid for it. The idea was to make the special “better than free” — by giving easy access to streams and a DRM-free download, Louis C.K. hoped to combat piracy from good-natured fans who would appreciate not being tied into a proprietary software or streaming method.

Relying on the honor system

Of course, not putting DRM on a file has its disadvantages: Not only is it easier for users to transfer it between devices and watch it at their leisure, but it’s also easier to pirate. The standup comic admitted as much, with a message on his site to those who might want to watch the special:

“To those who might wish to ‘torrent’ this video: look, I don’t really get the whole ‘torrent’ thing. I don’t know enough about it to judge either way. But I’d just like you to consider this: I made this video extremely easy to use against well-informed advice. I was told that it would be easier to torrent the way I made it, but I chose to do it this way anyway, because I want it to be easy for people to watch and enjoy this video in any way they want without ‘corporate’ restrictions.

Please bear in mind that I am not a company or a corporation. I’m just some guy. I paid for the production and posting of this video with my own money. I would like to be able to post more material to the fans in this way, which makes it cheaper for the buyer and more pleasant for me. So, please help me keep this being a good idea. I can’t stop you from torrenting; all I can do is politely ask you to pay your five little dollars, enjoy the video, and let other people find it in the same way.

In other words, Louis C.K. released the special on the honor system, hoping that his fans would recognize the value of his work and pay him accordingly.

No honor among thieves

As one might expect, not everyone was ready to hand over $5 for the standup special, and the file quickly found its way onto torrent sites like The Pirate Bay. One version of the file had this overly apologetic note attached from the original uploader [Ed: quoted exactly as posted, complete with errors]:

“yea its the new one yea i kinda feel bad putting it here but people like louis ck gotta realize without torrents and the net he wouldnt be anywhere bc honestly louis i know ur here and i know u mite be mad at me but u gotta realize not everyone has paypal , not everyone has credit cards, some people use net lounges, some have barely money for food, art = comedy should be shared with the mass , and Believe me u can judge the popularity more from the torrent downloads then the paypal sales, also if people like it , its easier to buy on there ipad/ipod or personal/work computers…more buzz = more fales

As of this writing, the most-downloaded version of Live at the Beacon Theater has more than 500 seeds, or users that are hosting the file. That’s a modest amount compared to some Hollywood blockbusters, which can have hundreds or even thousands of seeds for multiple versions of the movie. But it’s still a sizable amount for a lone comic with a niche viewing audience.

So what’s it all mean? It depends who you ask.

I’m sure there will be those who will say that Louis C.K. could have avoided (or at least limited) the impact of piracy on his direct-to-fan experiment by tying some sort of DRM to the file, but I personally doubt it. Just take a look at all the Hollywood fare that makes its way to The Pirate Bay and you can see that making it harder to rip and re-encode does little to thwart committed pirates from uploading files — and more importantly, it does even less to stop others from downloading them once they’re available.

And I’m sure there will be those who say that the pirated version of the special might have actually served as promotion for the paid download. There are a number of commenters in the Pirate Bay thread who say that they downloaded the torrented version, watched a few minutes and decided to pay Louis C.K. to own it.

Finally, there will be those who theorize that regardless of however many people are downloading the torrent right now, there would certainly be more pirating the special if it were released straight to HBO. At least this way, Louis C.K. is benefiting from a direct relationship with consumers who may or may not have cable, as opposed to losing out on potential viewership and potential profits, if someone else were handling distribution and the files ended up on torrent sites anyway.

At the end of the day, it will be difficult to say what effect this experiment had, except that it put Live at the Beacon Theater in the hands of more people who might want to see it than your usual straight-to-HBO special would have. But how many of those got it because they paid for it, and how many avoided paying for it due to a lack of DRM, is still up for debate.

by Tony Burkhart at 6:30 PM No comments: