Mac making a move in the enterprise, grew 44 percent in Q3

It’s a pattern we’ve seen for several quarters: Apple’s Mac sales post double-digit percentage increases as the broader PC market limps along with single-digit growth. So it’s not a huge surprise to see the Mac again making progress in its battle for market share. In a report issued Thursday, Needham & Co. analyst Charlie Wolf said the Mac had reached 5.2 percent of worldwide computer sales. While that seems like a tiny slice of a huge industry — and it is — it’s the largest chunk of PC market share Apple has owned in 15 years.

Yes, 5.2 percent is significant for Apple, the computer side of which brings in huge profits for the company, but maintains a relatively low sales share compared to the HPs, Dells, Acers and Lenovos of the world. But the momentum is Apple’s right now. It’s growing both in the consumer space, where it was up 24.6 percent compared to overall PC growth of 5.3 percent, and perhaps more surprisingly, in the workplace.

Needham says Macs’ share of enterprise computer sales grew 43.8 percent during the third quarter of this year, compared to overall enterprise PC growth of 4.8 percent. And it’s been happening for a few quarters in a row. In a note to investors, Wolf wrote:

“What we initially viewed as a one-quarter blip in the business market has emerged as a durable pattern.” 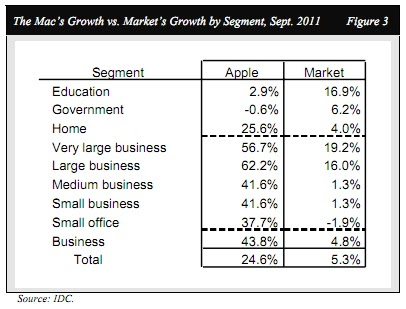 The growth, as the chart shows, isn’t coming in just one area, but is spread throughout the wider enterprise market for computers. Apple saw decent gains in every sector, with the exception of government purchases, but saw significant growth particularly in “very large” and “large” businesses.

Macs are no longer much of a rarity in the workplace. For many years, there were valid reasons Macs were used mainly in the publishing and creative spaces, since software compatibility made it hard to use them elsewhere. But as consumer adoption of Macs has increased steadily in the past few years, many employees are either asking their employers in all industries to buy them the same Macs they’re using at home, or they’re just bringing in their MacBook from home to the office. And increasingly, IT departments are letting them.

Last month, analyst firm Forrester made waves by changing course and strongly recommending businesses let their employees use computers running Mac OS X, because they have “gained a reputation for reliability and low maintenance,” according to Forrester. The report found 22 percent of enterprise businesses foresee the use of Macs owned by employees “increasing significantly.”

Be sure to grab a ticket to our Net:Work conference on December 8 in San Francisco to learn more about the changing face of IT and the ongoing consumerization of workplace tech.

by Tony Burkhart at 8:03 PM No comments: