As NASA commemorates the 10th anniversary of September 11, the anniversary is both a milestone for the country and a moment to reflect on the last ten years. Throughout the agency, we were deeply touched by the tragedy.
› Message From Administrator Bolden

This page chronicles some of NASA's remembrances of the September 11 attacks and the Americans who died that day. Astronaut Frank Culbertson -- The Only American Off the Planet 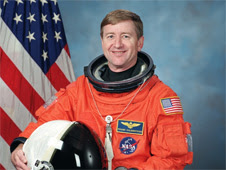 "The smoke seemed to have an odd bloom to it at the base of the column that was streaming south of the city. After reading one of the news articles we just received, I believe we were looking at NY around the time of, or shortly after, the collapse of the second tower. How horrible…"-Frank Culbertson Expedition 3 Commander Frank Culbertson was aboard the International Space Station at the time of the attacks, and the only American on the crew. As soon as he learned of the attacks, he began documenting the event in photographs because the station was flying over the New York City area. He captured incredible images in the minutes and hours following the event. From his unique vantage point in space, he recorded his thoughts of the world changing beneath him.

The following day, he posted a public letter that captured his initial thoughts of the events as they unfolded. "The world changed today. What I say or do is very minor compared to the significance of what happened to our country today when it was attacked." Upon further reflection, Culbertson said, "It's horrible to see smoke pouring from wounds in your own country from such a fantastic vantage point. The dichotomy of being on a spacecraft dedicated to improving life on the earth and watching life being destroyed by such willful, terrible acts is jolting to the psyche, no matter who you are." › Read Culbertson's Full Letter
› Video: Station Astronauts Honor 9/11 Victims

NASA science programs were called into action after Sept. 11, 2001, as the agency worked with FEMA to fly sensors over the affected areas on aircraft looking for aerial contaminants and used satellite resources to monitor from above. Flags for Heroes and Families 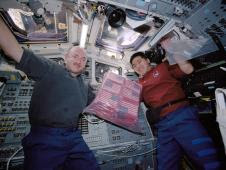 › View Larger
STS-108 astronauts Mark Kelly, left, and Dan Tani hold commemorative American flags the shuttle Endeavour in December 2001. The flags were later presented to victims' relatives.
Image credit: NASA NASA flew nearly 6,000 4 by 6 inch flags on Endeavour's flight during STS-108 to honor the victims of the terrorist attacks in New York, Washington, D.C. and Pennsylvania. Students working at Johnson Space Center in Houston, Texas assembled the commemorative packages, including the U.S. flags flown in space, to be presented to relatives of the victims. Distribution began on June 14, 2002, National Flag Day, at a ceremony held at the American Museum of Natural History's Rose Center for Earth and Space in New York. "The 'Flags for Heroes and Families' campaign is a way for us to honor and show our support for the thousands of brave men and women who have selflessly contributed to the relief and recovery efforts," said then-NASA Administrator Dan Goldin. "The American flags are a patriotic symbol of our strength and solidarity, and our Nation's resolve to prevail." "NASA wanted to come up with an appropriate tribute to the people who lost their lives in the tragic events of September 11," added Goldin. "America's space program has a long history of carrying items into space to commemorate historic events, acts of courage and dramatic achievements. 'Flags for Heroes and Families' is a natural extension of this ongoing outreach project." › Read More About 'Flags for Heroes and Families'→ Commemoration Goes to Mars Honeybee Robotics, one of the companies involved in building the Mars Exploration Rovers, is located just outside of New York City. As a tribute to the fallen, Honeybee created a dust cover for each rover's rock abrasion tools of aluminum, about the size of a credit card and adorned with the American flag that was cut out of debris from the World Trade Center. The rovers, Spirit and Opportunity, are currently on the surface of Mars. › Read More About the Rovers' 9/11 Tribute NASA Kennedy Adds Florida Touch to Sept. 11 Flag 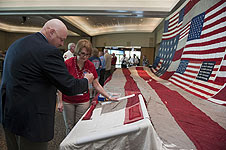 › View Larger
Joe Dowdy, special operations manager at Kennedy Space Center, works on Florida's contribution to the "National 9/11 Flag" during a ceremony at Kennedy on Feb. 18, 2011.
Image credit: NASA/Kim Shiflett The contributions of NASA and Kennedy Space Center were stitched into the fabric of one of the nation's most recognizable symbols, when flags from Florida's Spaceport were sewn into an American Flag recovered near ground zero following the Sept. 11, 2001, attacks. "A few days after the collapse of the World Trade Center this flag was hanging on a scaffolding at 90 West Street, which was a building directly south of the World Trade Center that was heavily damaged when the south tower collapsed," said Jeff Parness, director, founder and chairman of the "New York Says Thank You Foundation." The flag went on to become one of the most enduring symbols of the recovery from the attack. Once complete, "The National 9/11 Flag" will become a permanent collection of the National September 11 Memorial Museum being built at the World Trade Center site. There, America's flag can evoke a sense of pride, unity and hunger to keep achieving greatness, just as the nation's space program has for more than half a decade.

by Tony Burkhart at 9:26 AM No comments: