On the conference room wall | Flickr @ginatrapani maybe I should buy my wife that! ;) 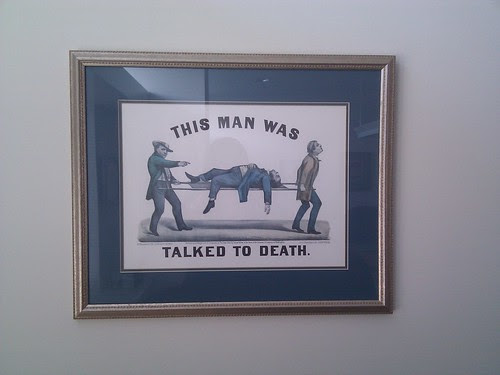 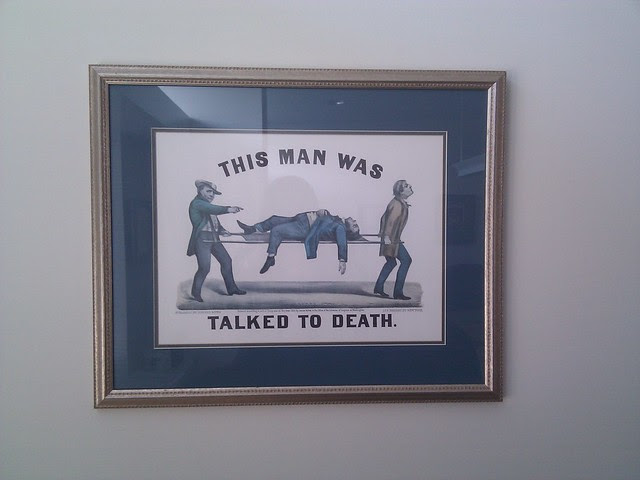 by Tony Burkhart at 7:21 PM No comments:

LimeWire Lives Again
Slashdot
Slayer Silver Wolf writes with this excerpt from TorrentFreak: "'On October 26 the remaining LimeWire developers were forced to shut down the company's servers and modify remote settings in the filesharing client to try to harm the Gnutella network. They were then laid off. Shortly after, a horde of piratical monkeys climbed aboard the abandoned ship, mended its sails, polished its cannons, and released it free to the community.' And so, LimeWire Pirate Edition (LPE) was born. Based on the LimeWire 5.6 beta that was briefly released earlier this year and then withdrawn when Lime Wire LLC lost its lawsuit, LPE is now in the wild. In many ways, it is better than the version killed by the RIAA."

by Tony Burkhart at 1:52 PM No comments:

This is the first case in which the labor board has stepped in to argue that workers’ criticisms of their bosses or companies on a social networking site are generally a protected activity and that employers would be violating the law by punishing workers for such statements.

The labor relations board announced last week that it had filed a complaint against an ambulance service, American Medical Response of Connecticut, that fired an emergency medical technician, accusing her, among other things, of violating a policy that bars employees from depicting the company “in any way” on Facebook or other social media sites in which they post pictures of themselves.

Lafe Solomon, the board’s acting general counsel, said, “This is a fairly straightforward case under the National Labor Relations Act — whether it takes place on Facebook or at the water cooler, it was employees talking jointly about working conditions, in this case about their supervisor, and they have a right to do that.”

That act gives workers a federally protected right to form unions, and it prohibits employers from punishing workers — whether union or nonunion — for discussing working conditions or unionization. The labor board said the company’s Facebook rule was “overly broad” and improperly limited employees’ rights to discuss working conditions among themselves.

Moreover, the board faulted another company policy, one prohibiting employees from making “disparaging” or “discriminatory” “comments when discussing the company or the employee’s superiors” and “co-workers.”

The board’s complaint prompted Morgan, Lewis & Bockius, a law firm with a large labor and employment practice representing hundreds of companies, to send a “lawflash” advisory on Monday to its clients, saying, “All private sector employers should take note,” regardless “of whether their work force is represented by a union.”

The firm added, “Employers should review their Internet and social media policies to determine whether they are susceptible to an allegation that the policy would ‘reasonably tend to chill employees’ ” in the exercise of their rights to discuss wages, working conditions and unionization.

American Medical Response of Connecticut denied the labor board’s allegations, saying they were without merit. “The employee in question was discharged based on multiple, serious complaints about her behavior,” the company said in a statement. “The employee was also held accountable for negative personal attacks against a co-worker posted publicly on Facebook. The company believes that the offensive statements made against the co-workers were not concerted activity protected under federal law.”

The case involves Dawnmarie Souza, who had to prepare a response to a customer’s complaint about her work. Ms. Souza, the board said, was unhappy that her supervisor would not let a representative of the Teamsters, the union representing the company’s workers, help prepare her response.

Ms. Souza then mocked her supervisor on Facebook, using several vulgarities to ridicule him, according to Jonathan Kreisberg, director of the board’s Hartford office, which filed the complaint. He also said she had written, “love how the company allows a 17 to become a supervisor” — 17 is the company’s lingo for a psychiatric patient.

The labor board said that her comments “drew supportive responses from her co-workers” and led to further negative comments about the supervisor. Mr. Kreisberg said: “You’re allowed to talk about your supervisor with your co-workers. You’re allowed to communicate the concerns and criticisms you have. The only difference in this case is she did it on Facebook and did it on her own time and her own computer.”

An administrative law judge is scheduled to begin hearing the case on Jan. 25. Marshall B. Babson, a member of the National Labor Relations Board in the 1980s, said a broad company rule that says one cannot make disparaging comments about supervisors is clearly illegal under labor law. But he said an employee’s criticizing a company or supervisor on Facebook was not necessarily protected activity.

“There will arguably be cases where it is not concerted activity,” Mr. Babson said, suggesting that if a worker lashed out in a post against a supervisor but was not communicating with co-workers, that type of comment might not be protected.

If the Facebook conversation involves several co-workers, however, it is far more likely to be viewed as “concerted protected activity,” he said.

But employees might cross the line into unprotected territory if they disparage supervisors over something unrelated to work — for instance, a supervisor’s sexual performance — or if their statements are disloyal.

Courts often view workers’ statements as disloyal when they are defamatory and are not supported by facts. Mr. Babson cited a case upholding the firing of airline workers who held signs saying their airline was unsafe. But, he said, if employees held signs accurately saying their airline or restaurant had been cited for dozens of safety violations, that would most likely be protected.

by Tony Burkhart at 6:28 AM No comments: