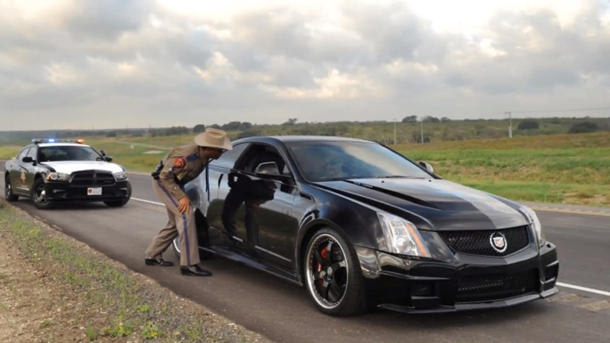 Texas tuner John Hennessey's work on big Detroit iron has its acolytes and detractors, but the man knows how to show off his wares. To highlight the top-speed performance of some of his big rigs, Texas authorities let him take a full-speed blast down the state's newest toll road outside Austin that opened today, one that features an 85-mph speed limit. It's just long enough for the 1,200-hp, twin-turbo Cadillac CTS-V coupe to hit 220.5 mph.

Hennessey told Jalopnik that the stunt came about after a conversation with state officials and an offer to test out a toll tag system to see if it could accurately report fines at triple-digit speeds. In addition to his 1,200-hp CTS-V coupe, Hennessey also brought a 707-hp Chevy Camaro ZL1 that managed to hit 203.9 mph along the same strip, with an even better sound. Hennessey says the CTS-V might have done 230 mph had he been granted another mile of tarmac.

And for the record: All of the electronics used by Texas state officials, including their radar guns, worked perfectly during the run. Word to the wise: 85 mph will probably be fast enough.