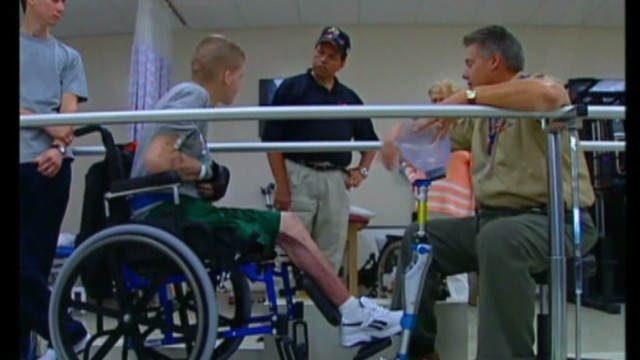 What did vets charity do with $56M?

Birmingham, Alabama (CNN) -- A national charity that vows to help disabled veterans and their families has spent tens of millions on marketing services, all the while doling out massive amounts of candy, hand sanitizer bottles and many other unnecessary items to veteran aid groups, according to a CNN investigation.

The Disabled National Veterans Foundation, based in Washington, D.C., and founded in 2007, received about $55.9 million in donations since it began operations in 2007, according to publicly available IRS 990 forms.

Yet according to the DNVF's tax filings with the IRS, almost none of that money has wound up in the hands of American veterans.

Instead, the charity made significant payments to Quadriga Art LLC, which owns two direct-mail fundraising companies hired by the DNVF to help garner donations, according to publicly available IRS 990 forms.

Those forms show the charity paid Quadriga and its subsidiary, Brickmill Marketing Services, nearly $61 million from 2008 until 2010, which was the last year public records were available.

"Up to $2 billion is raised in the name of veterans in this country and it's so sad that a great deal of it's wasted," Borochoff said. "Hundreds of millions of dollars of our charitable dollars intended to help veterans is being squandered and wasted by opportunists and by individuals and companies who see it as a profit-making opportunity."

On its website, the DVNF posted a "news bulletin" announcing that the charity had sent badly needed goods "by the truckload" to veterans centers in Birmingham, Alabama, in the wake of last year's devastating tornados.

DVNF specifically cited a small veterans charity called St. Benedict's. But the charity's executive director said most of the donations from DVNF could hardly be classified as "badly needed."

Simpson said the DVNF also sent him more than 700 pairs of Navy dress shoes, which he said he can't use. He has put them up for purchase at a yard sale.

In its tax filings, the DVNF also claims to have sent millions of dollars of so-called "Goods In Kind" to smaller veterans-related charities around the nation.

In one instance, the DVNF claimed more than $838,000 in fair market value donations to a small charity called US Vets in Prescott, Arizona.

CNN obtained the bill of lading for that shipment, which showed that, among other things, hundreds of chefs coats and aprons were included in the delivery, along with a needlepoint design pillowcase and cans of acrylic paint. The goods listed in the two-page shipping document were things "we don't need," a US Vets spokesman said. And at the bottom of the bill of lading, the DVNF itself estimated the value of the shipment at around $234,000 -- significantly less than the $838,000 it reported to the IRS.

CNN has attempted to get a comment from the DVNF for more than a year, but has received no specific replies, even after submitting several questions in writing.

"Well, this is the Veterans of Foreign Wars and I really didn't think you'd do something like this and we've agreed to talk to you ... answer your questions," she said, standing in the entranceway to her office.

Wilkewitz is the former national legislative liaison for the VFW, which is not directly tied to the Disabled Veterans National Foundation.

She said she would answer questions only in writing, but so far CNN has received no response.

When asked about Quadriga's relationship with DVNF, spokesman Ron Torossian told CNN in an e-mail that the company is privately owned and "we do not discuss specific client relationships." But according to IRS filings, Quadriga has been paid for direct-mail services by DVNF since the charity was founded in 2007.

Torossian did say in his e-mail, "At times, Quadriga chooses to invest money in partnerships with non-profit organizations. Sometimes it is a successful business venture, while others it is not."

When CNN asked whether that included the Disabled Veterans National Foundation, he said "your facts remain woefully inadequate," but he declined to elaborate in a later e-mail exchange. He also threatened to sue CNN on behalf of Quadriga.

At the small house in Birmingham where J.D. Simpson operates St. Benedict's, he said his main goal is to provide beds to homeless and disabled veterans.

"I ask myself what the heck are these people doing stealing from our veterans. because that's what they are doing," Simpsons said. "I don't care how you look at it. These people have sacrificed for our country. And there are some people out there raising money to abuse 'em and that just makes me mad."

by Tony Burkhart at 6:57 AM No comments: Links to this post

awesome write up from the OM team. follow the investment trail crumbs :)
http://gigaom.com/europe/why-facebook-and-silicon-valley-owe-it-all-to-moscow/?utm_source=feedburner&utm_medium=feed&utm_campaign=Feed%3A+OmMalik+%28GigaOM%3A+Tech%29

Why Facebook and Silicon Valley owe it all to Moscow

When Russia’s Digital Sky Technologies stepped in and spent $200 million on Facebook stock in 2009, it took many people by surprise. The company had been little known outside its home territory, but was suddenly making a name for itself with significant investments in Silicon Valley businesses — often at aggressive valuations. To some, the strategy looked crazy. In a deal overseen by Yuri Milner — an elusive former physics grad student from Moscow — the money was not just substantial, but it came with almost no strings attached. Not only did Milner have little say in how the company was run and no voice on the board, but he also agreed a side deal to buy back another $100 million in stock from existing shareholders.

It was the sort of approach that left many in the Bay Area wondering if he understood how venture capital worked at all.

But when Mark Zuckerberg’s social network goes public later this month, Milner’s strategy will score its greatest triumph, as DST and its partner Mail.ru Group plan to sell around a third of their stake for $1.5 billion, netting a huge profit.

According to Facebook’s IPO prospectus, DST — which operates through a complicated series of companies, is lining up the sale of more than 26 million shares worth nearly a billion dollars at the high end. Meanwhile Mail.ru, another holding company related to DST, will sell in the region of 11 million shares for up to $400 million.

The money will not only boost Milner’s personal wealth, but also plump the bank account of his main backer, the Uzbek oligarch and industrial magnate Alisher Usmanov — who Forbes says is already worth some $18 billion.

But perhaps its greatest value will be in vindication of DST’s model, which has gone from being seen as the work of green investors to perhaps being the single most important factor behind the recent surge of activity in Silicon Valley and across the technology industry more generally.

After all, Milner’s approach is a little different from the risky, spray-and-pray approach taken by many VCs. Instead, he has used money to make money in the most serious fashion.

With the backing of Usmanov (their relationship was detailed somewhat in a great feature in The Deal last year) Milner has perfected a way of making huge sums when everybody else feared creating a bubble.

Essentially the tactic seems to boil down to a series of straightforward steps: first find a category leader like Facebook, Zynga or Groupon; then use heavy investment to make sure that they outpace their competition and stretch their lead even further; then continue pushing them, with more money if necessary, towards an IPO.

But while the money clearly has intentions tied to it, it also appears to have no pressure — something that made DST a darling of entrepreneurs already fed up with juggling complex relationships with investors.

This approach was detailed by Michael Wolff in Wired a few months ago, and it’s as true now as it was then:

Milner offers something radically or foolishly different: an investment with no such preferences and no board seats. In effect, his money is like IPO money—no advantages for regular shareholders—without the burden of an IPO (the time suck of a road show, the administrative costs of being public, the short-term earnings pressure of the market).

The proposal represents, too, a philosophically new and audacious view: Once a company reaches a certain size—a billion-dollar valuation by Milner’s reckoning—its investment profile changes. It holds enough market share and has established enough brand identity that it represents significantly less risk than VCs have traditionally considered startups to have.

His smartest trick was boosting the industry at a time when most investors were being incredibly meek — effectively single-handedly inflating a flaccid market.

Without DST’s intervention, I’m not sure we’d be here.

Time for investors to send a letter of thanks to Moscow, perhaps?

by Tony Burkhart at 6:34 AM No comments: Links to this post