Updates that help you sleep better at night

I had been blocking the ball right and hitting a fade the first 6 holes, off the tee box. Logically and according to every muscle memory I had to that point, you think I would do the same on the par 5, 7th hole at Zanesville Jaycees Golf Course... logically. As you can well guess, I did NOT hit that block with a fade, otherwise I wouldn't be telling this story. I lined up directly at the right side of the crossover bridge and proceeded to hit a high, straight shot with a slight draw... oh no, a draw?! Wait, no, I haven't hit that shot all day! So as my well struck golf shot floats gently into the watery grave, I tell myself "that's okay, it was a good swing, which you can repeat" and try to take the positive out of this. Take my lateral drop... one in, two out and hitting three. I line up to the middle of the fairway, looking to get inside the one hundred yard marker and hit my 5 wood, in a smooth controlled DEAD BLOCK  RIGHT, following the water line during its entire flight, as if its goal is to stay directly over the center of the land. Three in, four out and you're hitting 5 from 190 yards out.  Okay, we can still salvage a double. Let's get this ball close and get up and down. 5 iron chunk... I think I hit two inches behind that ball. I still have 80 yards to the green. I plan on a high flop sand wedge, to get close. Okay, we get 7 on and look to save a dismal snowman. All things said, that isn't bad for the shit storm of a hole we have had. Let's not forget I have been putting great so far today. Obviously THIS HOLE is opposite, parallel universe hole today and as anyone who is doing math can hypothesize... I three jack the damned green, for a big, fat, ugly 10. Double digits on a par 5... twice the score allotted for par. Dude, seriously, that stinks.
That all being said and the reason the following story is linked, because according to the article, "Sergio Garcia hit four balls into the water at the par-4 third hole and made a 12. Paul Casey made a hole-in-one on the 13th hole."
Thanks Sergio, I feel better, though I wish your round no harm, it's good to know you guys are human too. At the same time this happened, Paul Casey made the ace. I love this game!
http://bostonglobe.com/sports/2012/03/12/rose-steals-show/zuvhZyo0INJPkB0z9BTzoL/story.html 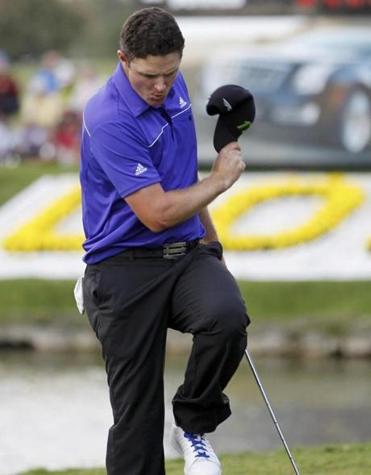 Winner Justin Rose has a spring in his step after sinking his final putt at Doral.

Justin Rose expected a moment like this, posing on the 18th green of the famed Blue Monster at Doral, Fla., with a World Golf Championship trophy in his hands. It’s the rest of the script that made Sunday so surprising.

The biggest charge came from Rory McIlroy, eight shots behind until he crept within one of the lead late in the round.

The early departure came from Tiger Woods, who muddied his Masters future by limping off the course after 11 holes with soreness in the left Achilles’ tendon, the one that caused him to miss two majors last year.

Bubba Watson went from a collapse on the front nine, when he lost his three-shot lead in four holes, to a clutch shot on the final hole when he hit a bullet of a 4-iron out of the palm trees to 9 feet from the cup that put one last scare into Rose.

All that drama, and Rose didn’t realize he had won until he was on the practice range and heard nothing. Watson missed the birdie putt.

Rose closed with a 2-under-par 70, a score he didn’t think would be nearly good enough to win.

“I’ve been very focused on seeing this whole Florida swing as like a body of work, and not really trying to put too much focus on any individual tournament,’’ he said. “I kind of knew I was playing well, and if I just kept out of my own way for the most part and kept thinking well and doing the right things, I had a feeling something good might happen.’’

It was a day of endless drama.

Sergio Garcia hit four balls into the water at the par-4 third hole and made a 12. Paul Casey made a hole-in-one on the 13th hole. Rose had to make up a three-shot deficit on Watson at the start of the round, and when he made the turn, he found himself two shots behind PGA champion Keegan Bradley, who then shot 41 on the back nine.

Through so much commotion, Rose never felt steadier.

For Woods, his future is a mystery.

“I felt tightness in my left Achilles’ warming up this morning, and it continued to get progressively worse,’’ Woods said in a statement. “After hitting my tee shot at 12, I decided it was necessary to withdraw.’’

Nationwide - Paul Haley II won the Chile Classic in Santiago in his third career Nationwide Tour start, closing with a 1-under 71 for a three-stroke victory.

Joseph Bramlett shot a 64 to finish second. Paul Claxton was another stroke back after a 68, while Andover’s Rob Oppenheim (69) was fourth at 16 under.

by Tony Burkhart at 8:56 AM No comments: