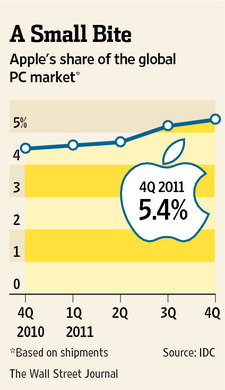 In an interview at the company's headquarters here, Mr. Cook unveiled a new version of the company's Mac operating system that incorporates several features from the software that powers Apple's hit mobile devices.

Named "Mountain Lion," the new version of OS X is the clearest sign yet of Apple's belief that the mobile, laptop and desktop world are destined to converge—and that Apple wants to be a catalyst.

"We see that people are in love with a lot of the apps and functionality here," said Mr. Cook, 51 years old, pointing at his iPhone. "So, anywhere where it makes sense, we are going to move that over to Mac."

Apple's moves come as fiercer competition among hardware makers is leading them to compete over software and giving consumers a familiar experience across various devices. That is leading to a convergence between different categories of devices that could have wide ramifications across the technology industry.

Apple also hopes to add luster to a business line that has momentum but little market share. Apple sold a record 5.2 million Macs in the quarter ended in December, up 26% from the same quarter in 2010. But Macs represented 5.4% of global PC shipments in the fourth quarter, according to IDC, up from 4.5% a year earlier.

By comparison, Apple's iPad leads the tablet industry in market share, and its iPhones frequently command the biggest slice of quarterly smartphone shipments.

Apple will start selling the new Mac software to customers in late summer. It made an early version of the software available to developers Thursday.

The updates will include Apple's messaging service, notifications app, gaming center, sharing features and integration with the company's online service iCloud—all pioneered for the iPad and iPhone, which use software known as iOS.

Mr. Cook said he already thinks of Apple's iOS and OS X operating systems "as one with incremental functionality." He said both laptops and tablets will continue to coexist, but he didn't rule out that the technologies could converge further.

When asked if Apple's iPhones, iPads and Macs might run the same microprocessor chips, he said: "We think about everything. We don't close things off."

Apple's OS X team had already started borrowing from iOS, last July releasing the "Lion" version of its operating system that adopted iOS features like advanced gesture controls—by touching the Mac's track pad, rather than a display screen—and the ability to view desktop apps as icons in an iPhone-like grid.

Now, Apple is going further, even changing the names of internally developed Mac apps to those of iPhone counterparts. The Mac's Address Book, for example, will become Contacts. iCal will become Calendar.

"We went through and just took a logical pass at what the user is going to experience using these products to make it all make more sense together," said Phil Schiller, Apple's senior vice president of world-wide marketing, in a separate interview. "This is more than people expect."

With Mountain Lion, users will see the same notification screen that scrolls down on the iPhone by swiping their touchpads. The new software has deeper ties to other Apple products, such as iCloud, which Apple is integrating into applications and into the experience of registering a new Mac. A new security feature called Gatekeeper allows users to specify what kinds of apps can be installed on their computers, including an option to only install apps from Apple's Mac App store. 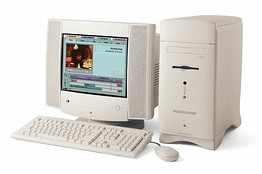 The new Mac software will also support a feature called AirPlay Mirroring that allows users to view what is on the screen of their iPhone or iPad and a television screen connected to a $99 Apple TV device. The technology is highly strategic for Apple, as it contemplates new video technologies for the living room. AirPlay, already available for the iPhone and iPad, has run into opposition from media companies worried about cannibalizing of traditional TV. Mr. Schiller said he doesn't believe media companies will have any issue with customers using it from their Macs.

Not all mobile features will make it to the Mac. Messrs. Cook and Schiller both said important differences remain, including the need for different touch interfaces on mobile devices, as well as more robust location services. When asked if the Mac would get Siri, Apple's voice-activated virtual assistant available on the iPhone, Mr. Cook smiled and said he would leave the question to Mr. Schiller.

Mountain Lion comes as Mac has been a relatively small contributor to the company's record financial performance. As the company's revenue jumped 73% in the quarter ending in December, the percentage of its revenue from Macs fell to 14.2% from 20.3%. 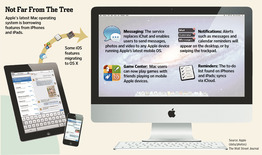 Mr. Cook said the Mac remains an "incredibly important" part of the company and that it is already benefiting from the success of the iPhone, particularly in China, where Mac sales doubled last year. "They love the iPhone and so they then search out and look for the Mac." 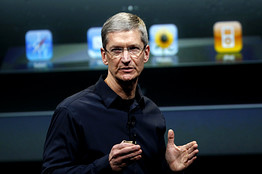 While Apple banks on that halo effect, its competitors are trying to follow its approach. Microsoft Corp. plans to release a new version of its Windows operating system that has a new interface that supports touch-based commands and resembles its mobile-phone software.

"I don't really think anything Microsoft does puts pressure on Apple," said Mr. Cook, who said Apple is focused on building the best product and the pressure on the company is "self-induced."

Mr. Cook declined to comment on future plans for Mac hardware, calling the company "secretive" about such things. But he expressed pride in the company's MacBook Air laptop. "Now, you see the industry at large trying to copy it in some way, but they'll find that it is not so easy," he said.