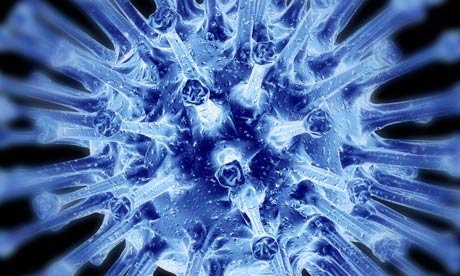 A team at Oxford University has had success testing a vaccine that can neuter any strain of flu virus. Photograph: Science Photo Library

Scientists at Oxford University have successfully tested a universal flu vaccine that could work against all known strains of the illness, taking a significant step in the fight against a disease that affects billions of people each year.

The treatment – using a new technique and tested for the first time on humans infected with flu – targets a different part of the flu virus to traditional vaccines, meaning it does not need expensive reformulation every year to match the most prevalent virus that is circulating the world.

Developed by a team led by Dr Sarah Gilbert at Oxford's Jenner Institute, the vaccine targets proteins inside the flu virus that are common across all strains, instead of those that sit on the virus's external coat, which are liable to mutate.

If used widely a universal flu vaccine could prevent pandemics, such as the swine flu outbreaks of recent years, and end the need for a seasonal flu jab.

"The problem with flu is that you've got lots of different strains and they keep changing," said Adrian Hill, director of the Jenner Institute. "Occasionally one comes out of wildfowl or pigs and we're not immune to it. We need new vaccines and we can't make them fast enough."

A universal vaccine would save the time and money now needed to create vaccines to fight whatever particular virus has emerged in any year. The government spent an estimated £1.2bn in preparing for the swine flu outbreak of last winter.

The process of developing a seasonal vaccine takes at least four months and if the flu strain is highly pathogenic – as in 1918 when millions of people died – the delay means more people get sick and die before the vaccine is ready.

This winter the government was criticised for its handling of the annual winter flu outbreak. Shortages of the seasonal flu vaccine became so acute in some areas that GPs were told to use old stocks of swine flu vaccine instead.

"If we were using the same vaccine year in, year out, it would be more like vaccinating against other diseases like tetanus," said Gilbert. "It would become a routine vaccination that would be manufactured and used all the time at a steady level. We wouldn't have these sudden demands or shortages – all that would stop."

While traditional vaccines prompt the body to create antibodies, Gilbert's vaccine boosts the number of the body's T-cells, another key part of the immune system. These can identify and destroy body cells that have been infected by a virus.

In her trial, Gilbert vaccinated 11 healthy volunteers and then infected them, along with 11 non-vaccinated volunteers, with the Wisconsin strain of the H3N2 influenza A virus, which was first isolated in 2005. She monitored the volunteers' symptoms twice a day, including runny noses, coughs and sore throats, and she calculated how much mucus everyone produced by weighing tissues they used. Though a small study, it was significant in that it was the first vaccine of its type to be tested on people.

Hill said the trial proved two important things about the vaccine. "It showed that it was safe; and giving people flu virus in the presence of lots of T-cells induced by the vaccine was absolutely fine.

"What we'll probably do is take the existing flu vaccine and mix in the new virus-vector vaccine, so you get both good antibodies and good T-cells. As well as giving you the antibodies for this season's strain of flu, we'll give you some T-cells that will cover this season, next year, next year and thereafter. It may not be 100% effective against all strains, but at least if there were a pandemic coming around, it would cover you for any strain."

It is believed that the vaccine could provide better protection against flu for older people. The Jenner Institute scientists are already testing it on people over 50, a group that does not respond so well to traditional vaccines.

Gilbert says that the older people get, the less efficient their immune systems are at making new antibodies. "Immune memory lasts longer than that, so if people have already got responses to something, it's not so difficult to re-activate them. What we're trying to do with our T-cell vaccine is re-activate the T-cell responses they've already got as a result of their previous exposure to flu."

The next step for the T-cell vaccine is to stage a field trial in comparing several thousand people are given and not given the vaccine. It will take several more years, therefore, before Gilbert's vaccine can be licensed for use alongside traditional, antibody-inducing vaccines.

Mark Fielder, a medical microbiologist at Kingston University, said: "This study represents some potentially very exciting findings with positive implications not only for influenza but possibly for infectious disease in a wider context. The findings are extremely encouraging in terms of the apparent efficacy of the virus and the that it appears to be a safe formulation. However, I think that a larger trial will be able to confirm these findings and let this technology be taken forward."

He added: "T-cell vaccines are an exciting technology and we should encourage research and development into the area of vaccinology to help combat infectious diseases in all parts of the world."

A traditional flu vaccine uses the external proteins on a flu virus (the H and N on strains such as H1N1 and H3N2) to prompt the body's immune system to create antibodies. These proteins, however, are different across different strains and they are liable to mutate, making immune responses from vaccines limited.

Instead, Sarah Gilbert's team at the Jenner Institute created a vaccine that targets two proteins inside the flu virus that are much more similar across strains and less liable to change over time. Nucleoprotein and matrix protein 1 are more than 90% identical in all strains of influenza A. "The nucleoprotein is wrapped around the viral RNA, there's quite a lot of it in flu virus and infected cells," she said.

"It's essential for the virus because, if it doesn't have the nucleoprotein, its genome isn't stable. It can't do without it and it can't change it very much because it has a particular function and, if it mutates, it won't work. Matrix protein 1 is a structural protein which is part of the inside of the shell around the virus." Though Gilbert used the H3N2/Wisconsin strain in her trial, she can therefore be confident that her results will also hold for other strains.