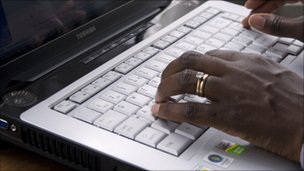 A website which pays the public to monitor live commercial CCTV footage online has been launched in Devon.

Internet Eyes will pay up to £1,000 to subscribers who regularly report suspicious activity such as shoplifting.

But civil liberties campaigners say the idea is "distasteful" and encourages private citizens to spy on each other.

The private company intends to stream live footage to subscribers' home computers from CCTV cameras installed in shops and other businesses.

Mr Morgan said: "The subscribers will have access to four screens at the same time and if they see anything suspicious, they can press the 'alert' button. This then sends an instant text and picture message to the shop assistant or manager - who then makes the decision about what action to take."

He said people have no choice over what CCTV footage they are able to watch for the 20 minutes they have access to, and they would be banned from viewing footage in their local area.

He added: "The cameras are already there - we just link to them so people can watch them. All you see is the tops of people's heads.

"The whole point of this is that it is a deterrent. People watch Crimewatch and that's not entertainment. We just want it to help people out."

He said more than 13,000 people had indicated their interest in the project but he expected more people to join "once they had something to watch".

The Information Commissioner's Office (ICO) has allowed the company to launch its beta site after it agreed to a number of changes, including only allowing subscribers aged 18 and over to access the site.

The ICO also requested the company, which had planned to offer the service for free, make people pay £12.99 or £1.99 to use it so their details could be checked and to prevent any voyeurism and misuse of the system.

Although the CCTV cameras are based in stores across the UK, the rewards are open to anyone from the European Union who is registered with the site.

A spokesman for the watchdog said: "Our CCTV code of practice makes it clear that CCTV operators should use appropriately trained staff to monitor images.

"We have provided advice to Internet Eyes on its own data protection compliance. We will be checking to ensure it has followed this and investigate any complaints we receive.

Campaign organisations No CCTV and Privacy International ,which joined forces to oppose the scheme, say they still have major concerns about it.

No CCTV's Charles Farrier called the scheme a "profit-making gimmick" and told the BBC: "[The subscribers] are not going to spot crime - these are shops and businesses under surveillance, not crime dens."

He said he feared that people would take copies of the livestream and upload them to file-sharing networks.

"There are not enough checks and balances in place. We will be looking for instances where they may potentially breach the data protection act."

He added: "This is encouraging a growing trend of citizen spies. If people are so concerned about crime, they should contact the police.

"They are hiding behind computer screens and willing crime to happen so they get a prize. It is a game."

Mr Morgan said that posters would warn people the business was taking part in the scheme.

One subscriber, Paul from Hammersmith, told the BBC News website he thought it was his civic duty to sign up.

"We're in a time of austerity and there has been a reduction in the budgets of police and local authorities but by doing this, I feel I can help.

"It will help people feel safe and secure and it's not like putting a camera in your house. These are in public places. I hate criminality and if I can help stop it, I will."