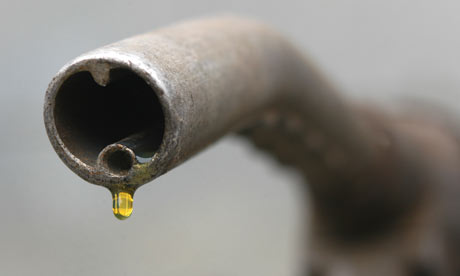 It gives a whole new meaning to the phrase "one for the road". Whisky, the spirit that powers the Scottish economy, is being used to develop a new biofuel which could be available at petrol pumps in a few years.

Using samples from the Glenkinchie Distillery in East Lothian, researchers at Edinburgh Napier University have developed a method of producing biofuel from two main by-products of the whisky distilling process – "pot ale", the liquid from the copper stills, and "draff", the spent grains.

Copious quantities of both waste products are produced by the £4bn whisky industry each year, and the scientists say there is real potential for the biofuel, to be available at local garage forecourts alongside traditional fuels. It can be used in conventional cars without adapting their engines. The team also said it could be used to fuel planes and as the basis for chemicals such as acetone, an important solvent.

The new method developed by the team produces butanol, which gives 30% more power output than the traditional biofuel ethanol. It is based on a 100-year-old process that was originally developed to produce butanol and acetone by fermenting sugar. The team has adapted this to use whiskey by-products as a starting point and has filed for a patent to cover the new method. It plans to create a spin-out company to commercialise the invention.

Professor Martin Tangney, who directed the project said that using waste products was more environmentally sustainable than growing crops specifically to generate biofuel. He added that it could contribute significantly to targets set by the EU for biofuels to account for 10% of total fuel sales by 2020.

"What people need to do is stop thinking 'either or'; people need to stop thinking like for like substitution for oil. That's not going to happen. Different things will be needed in different countries. Electric cars will play some role in the market, taking cars off the road could be one of the most important things we ever do."

Dr Richard Dixon, of WWF Scotland, welcomed the project. "The production of some biofuels can cause massive environmental damage to forests and wildlife," he said. "So whisky powered-cars could help Scotland avoid having to use those forest-trashing biofuels."