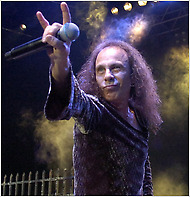 Ronnie James Dio, a singer with the bands Rainbow, Black Sabbath and Dio, whose powerful, semioperatic vocal style and attachment to demonic imagery made him one of the best-loved figures in classic heavy metal, died on Sunday morning, according to an announcement on his Web site by his wife, Wendy. He was 67.

No cause was given in the announcement, but Mr. Dio had been suffering from stomach cancer, and recently his band Heaven and Hell canceled its summer tour because of his health. The Houston Chronicle reported that Mr. Dio was being treated at a hospital in Houston.

Mr. Dio was born Ronald James Padavona in Portsmouth, N.H., and grew up in Cortland, N.Y. He began his career in rockabilly bands in the late 1950s, but by the mid-1970s, when Ritchie Blackmore, the guitarist of the British band Deep Purple, hired him to sing for his new band, Rainbow, Mr. Dio had become a heavy-metal purist, and he became known as much for his vocal prowess as for his Mephistophelean stage persona. He is widely credited with popularizing the “devil horn” hand gesture — index and pinky fingers up, everything else clenched in a fist — as a symbol of metal’s occult-like worship of everything scary and heavy.

Mr. Dio sang about devils, defiance and the glory of rock ‘n’ roll with a strong, mean voice, punctuating his points with gale-force vibrato, a style derived in part from singers like Deep Purple’s Ian Gillan. When Ozzy Osborne was fired from Black Sabbath in 1979, Mr. Dio replaced him, and by 1983 he released the album “Holy Diver” with his own band, Dio. In various lineup configurations, the band Dio continued to release material in the mid-2000s.

Other than his wife, no information about his survivors was immediately available on Sunday afternoon.

Sad day for the rock community

Posted via web from tonyburkhart's posterous